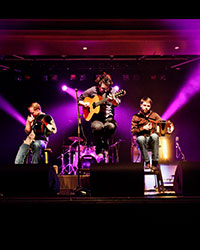 Old souls are thought to be wise beyond their years, having an interest in things that others their age don’t really appreciate. In that sense, it is fitting to have these particular artists performing in a concert called “Old Souls”. There is a depth of soul, character and experience that comes out in their performance. Despite their relative youth, they have immersed themselves in traditional and old-time musical styles. As most Cape Breton musicians do, Gillian, Sheena, and Tessa Boucher started playing and step dancing as young kids. The Dardanelles, from Newfoundland, established themselves as a Trad tour-de-force when they were just barely into their twenties. Banjo-playing singer and songwriter Kaia Kater’s first recording—released right out of high school in 2013—was called Old Souls. Nic Gareiss’ interest in traditional dance styles brought him together with Scottish fiddler Mairi Campbell to further explore the percussive dance he is best known for. Hosted by Inverness Academy Student Council

NEARBY MEALS: Roast Beef Dinner at the Arts Centre

Please Note: Artists and events subject to change without notice.

Buy To This Event Directions